COPA-DATA is building an additional office building 250 meters away from the company’s Salzburg headquarters. The project kicked off with a ground-breaking ceremony this week. COPA-DATA is investing over ten million euros in the development, which will provide a further 120 office seats. The low-energy building will generate most of the energy it uses and be a Smart Building with the help of zenon.

"It's time for us to expand. We burst from almost all seams," said Thomas Punzenberger, CEO and founder of COPA-DATA, at the ground-breaking ceremony. When the founder moved into the current headquarters with 27 employees in 2003, two floors were used by subtenants. Since then, despite an expansion in 2011 and the takeover of the entire building in 2015, COPA-DATA’s demand for additional space continues to grow. 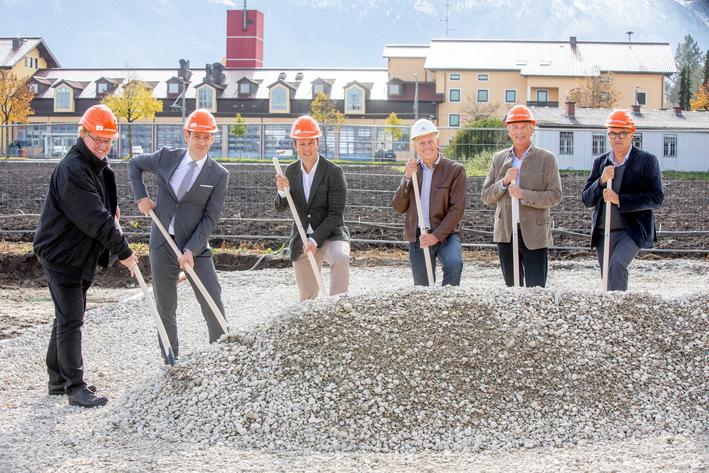 The six-floor low-energy building, which includes an underground car park, is going to be constructed in 14 months. New work areas will be created over a total of approx. 2,400 m2. Besides a roof terrace, a large garden terrace is planned.

The design includes space for a total of 30 car parking spaces and almost 90 bicycle parking spaces. Charging stations for electric cars and bikes will also be installed. Two large changing areas with showers will be located in the basement. This will facilitate the sporting activities of employees during breaks or when travelling to or from work. 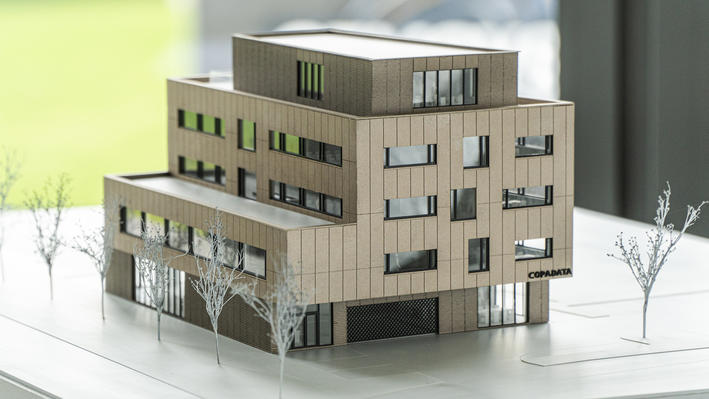 COPA-DATA is building the new low-energy building (show here as a 3D model) with 120 new office workspaces located only 250 meters away from the existing headquarters in Salzburg.

Plans for the new COPA-DATA office building were drawn up by Arch. DI Gerhard Sailer and DI Stephan Podbelsek of the architekturbüro HALLE 1. "The new building conveys in its appearance the objectivity, precision, intrinsic value and functionality which COPA-DATA customers expect from their software developer," explains Gerhard Sailer.

"In order to remain agile in the way we work and in the way we use the building, we decided to specify office floors that can be subdivided into modules," says Phillip Werr, Chief Marketing and Operations Officer at COPA-DATA. The power supply for the workstations will be connected via the ceiling to keep the office landscape flexible. Each floor will also feature modern meeting rooms and kitchenettes. 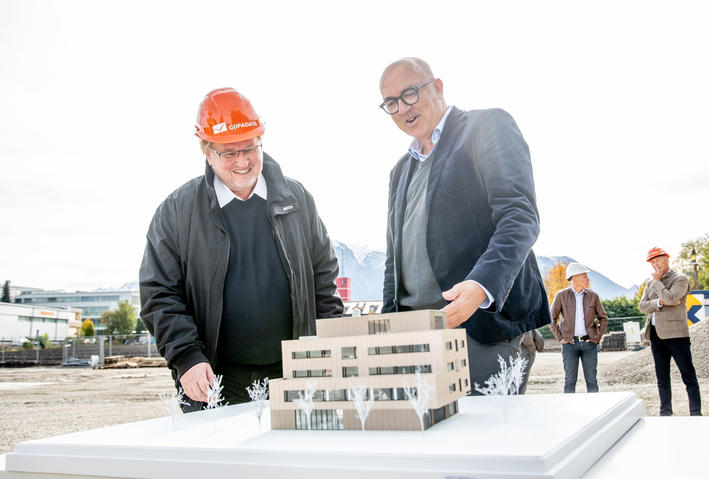 So far, the new COPA-DATA building planned by architekturbüro HALLE 1 is only a 3D model, here observed by Thomas Punzenberger and architect Gerhard Sailer.

A 60 KWp PV system will generate the electricity for the building. zenon will control and optimize the energy consumption of the building and, thus, the new building will be a Smart Building. The building's own brine-water heat-pump system will heat and cool the rooms – powered by twelve 150-meter-deep probes. The heating and cooling pipes are to be installed directly in the concrete.

Coupled with the central ventilation via ventilation ducts on the office ceilings, the incoming fresh air will be filtered and temperature controlled to ensure an optimal indoor climate. In order to direct as much natural, non-dazzling light as possible into the offices, the majority of windows will be oriented to the northwest.

The ground floor has been designed as a flexible space that can be used as a lecture hall or auditorium or as an open work and break room with a shared kitchen and access to the garden terrace. The top floor will have two meeting rooms with panoramic views of Salzburg and its mountains. 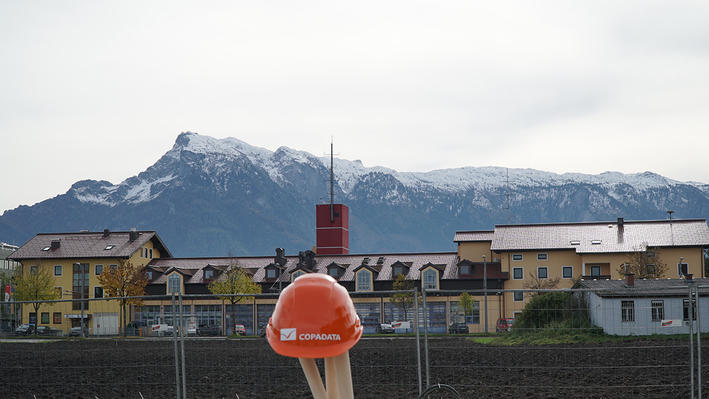 It will be possible to admire the view onto Salzburg's Untersberg from the new building’s roof terrace.

You can find out more about COPA-DATA here.
Fancy working here with us? Become part of the COPA-DATA team yourself and you too can decisively advance the digitalization of industry and the energy sector. Find out more here.